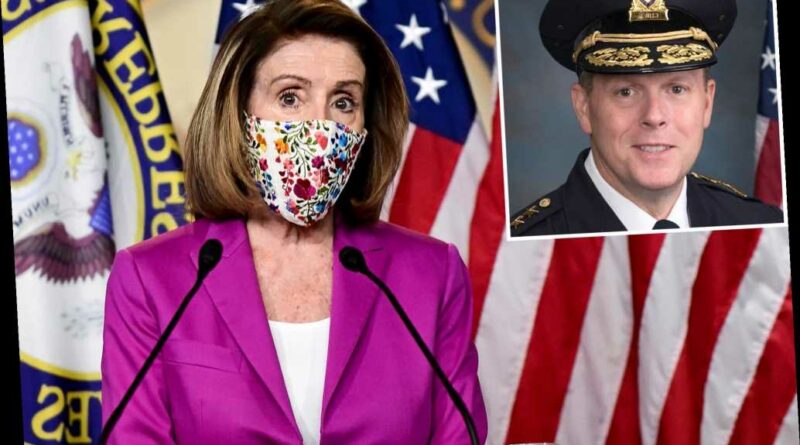 DC police release photos of suspects in US Capitol siege

House Speaker Nancy Pelosi is demanding the resignation of Capitol Police Chief Steven Sund over the mob of President Trump supporters that was allowed to storm Congress over his election loss.

Sund “hasn’t even called us since this happened,” Pelosi said at a Thursday afternoon press conference, roughly 24 hours after the jarring assault.

Pelosi (D-Calif.) said House Sergeant-at-Arms Paul Irving already is resigning in response to the attack on the Capitol — which delayed but did not prevent certification of President-elect Joe Biden’s victory over Trump.

Pro-Trump protesters pillaged offices, broke onto the Senate floor and clashed with law enforcement under the Rotunda during hours of chaos.

A Trump supporter was fatally shot by a policeman while attempting to enter Pelosi’s speaker’s lobby. Another protester was photographed stealing Pelosi’s podium, adorned with her official seal.

“There was a failure of leadership at the top of the Capitol Police.”

“If Senate Sergeant-at-Arms Stenger hasn’t vacated the position… I will fire him as soon as Democrats have a majority in the Senate,” Schumer said.

Pro-Trump protesters were able to gain access to the building after meeting shockingly little resistance when removing a perimeter fence. Multiple entrances to the building were then broken into, sending lawmakers scrambling to safety.

The Senate chamber was accessed after protesters entered the apparently unlocked visitor’s galleries above the Senate floor. One activist was photographed jumping over the balcony. He then unlocked the Senate’s doors for others. Officers pleaded with the group not to snoop through senators’ belongings.

Pelosi said that there would be a comprehensive review, including of why it took so long for federal agents to swarm Capitol Hill to restore order.

“We will have the after-action review but it goes beyond the Capitol Police,” Pelosi said.

“It goes to the FBI. What was the shortcoming in their intelligence that they provided? It goes to the Department of Defense. How long did it take for them to respond or anticipate the need for the National Guard? It goes to many other elements of the executive branch.”

Outgoing Senate Majority Leader Mitch McConnell (R-Ky.) said Thursday there were “shocking failures in the Capitol’s security posture and protocols” and called for “a painstaking investigation and thorough review.”

McConnell’s wife, Transportation Secretary Elaine Chao, on Thursday became the first Trump Cabinet member to announce her resignation over the assault, which followed a speech near the White House where Trump told thousands of supporters that the election was stolen from them and that they should march on the Capitol.