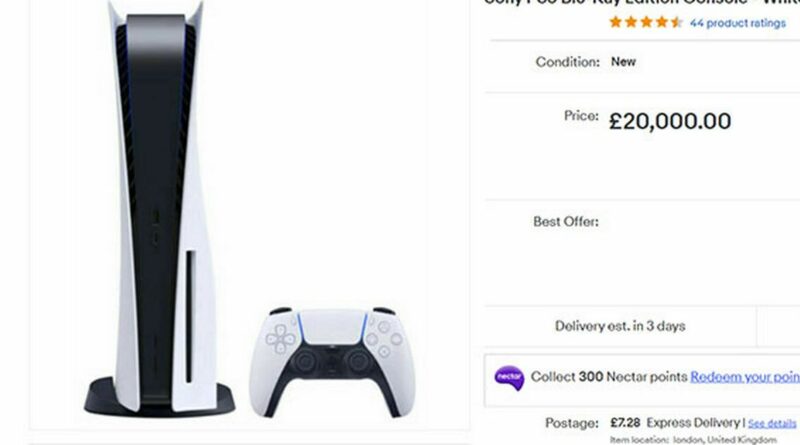 A Playstation 5 is apparently being sold for an eye-watering £20,000 on eBay by a "rude" London seller.

That's more than 40 times the must-have console's retail price of £450.

But seller shaqeal11 seems to believe gamers are desperate enough to shell out the gigantic sum.

He is even charging £7.28 for postage – more than three months after the Sony product hit the shelves.

Gamers have been struggling to get a hold of the PS5 with resellers peddling it for thousands of pounds in the days after launch.

Sony launched the PS5 in mid November, charging £350 for the digital version and £450 for the full-fat console with a disc tray.

Ever since, stock has vanished in a matter of minutes – and sometimes even seconds.

But shaqeal11 appears to be taking the biscuit by listing his 'Sony PS5 Blu-Ray Edition Console – White' for £20,000 with no cash refunds.

And it's not the only product he is charging over the odds for.

On the site since April 2011, he is also flogging winter socks for a ludicrous £1,234 as Britain faces bone-chilling weather conditions.

Piers for PM? Have your say!

The Daily Star has projected an image of Piers Morgan onto the Houses of Parliament – and we’re asking you are we ready for #PMFORPM?

Last week the Daily Star jokingly asked the question on nobody’s lips: Would PM be a better PM than our current PM?

And it seems we may have inadvertently unleashed a monster. Shy and retiring Piers – no stranger to holding our politicians to account on Good Morning Britain – leapt on the idea.

So, are you Team Piers or Team Bozo? Take part in our survey!

The 'Bridgedale Hike Midweight Men's Hiking Socks – Size L, Green' normally go for around £13 and have attracted no bids.

He boasts a 90% approval rating on the site, with a negative February 1 review stating: "Conned me out of money and was rude, unapologetic an unwilling to resolve sadly"

Many gamers were left without a PS5 console for Christmas, due to high demand and a widespread scalping issue.

It means the coveted units are still going for exorbitant sums on websites like eBay.

And when viewing "completed listings", buyers had paid well over £700 to secure a console, the Sun reports.

Sony has promised more stock in 2021 with insiders linking delays to shortages of the chips that power the consoles.

It's expected that these shortages will be over by June or July.

When Life Gives You Parkinson’s podcast: WPC 2019 comes to an end

British grandfather, 73, missing on Greek island of Zante for a week