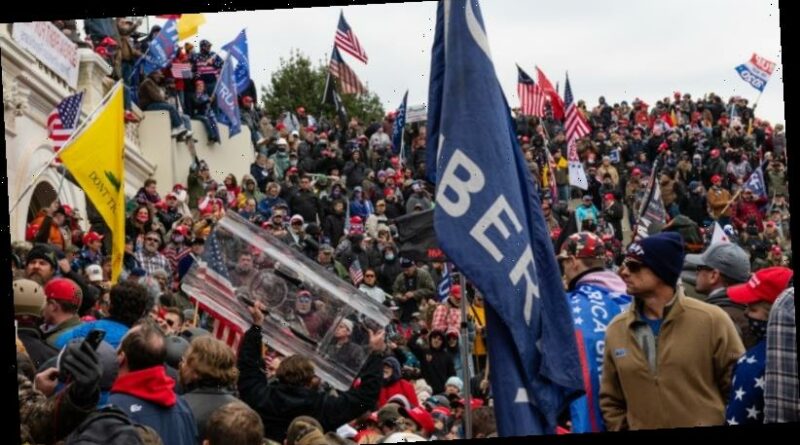 As a mob of pro-Trump rioters attacked the Capitol last week, one man in a white hat and backpack grabbed a police officer by the helmet, dragging the officer down the stairs. Soon, other rioters kicked and punched the officer, and one man even bashed the prone figure repeatedly with a pole flying an American flag.

The shocking violence against an outnumbered officer is shown in a video first aired by CNN and which swiftly went viral, garnering more than 1.6 million views on Twitter by early on Monday morning, local time.

The officer seen in the video, as well as in other photos and videos of the moment that later surfaced on social media, has not been officially identified. It's also not clear the extent of the injuries the officer suffered in the attack.

DC Metropolitan Police and US Capitol Police did not immediately return a request for comment on the video late on Sunday.

The video adds a new layer of evidence documenting the brutal violence the pro-Trump mob unleashed during the attempted insurrection at the Capitol, where overrun police tried to protect the federal building. One US Capitol Police officer, Brian D Sicknick, was killed in the incident and more than 50 other police officers were injured. One rioter was fatally shot by police, and three other people died following medical emergencies.

CNN reported that the video captured the scene outside the Capitol around 4.30pm on Wednesday. That's roughly 10 minutes after President Trump tweeted a video message addressing the crowd, telling the rioters: "We love you. You're very special."

"We've seen what happens, you see the way others are treated that are so bad and so evil," Trump continued in the statement. "I know you how feel. But go home, and go home in peace." 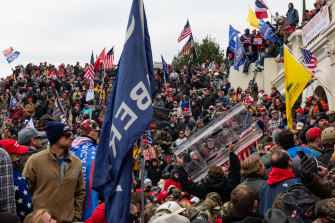 Rioters steal a DC Metropolitan Police shield outside the US Capitol building.Credit:Bloomberg

The video shows that after the man grabbed the police officer, yanking him down the stairs, others kicked and beat the officer on the ground. As the crowd attacked, people chanted "USA, USA" and a man shouted "Take him out."

At the same time, other people in the crowd threw flagpoles, metal crutches and other projectiles at police standing just inside an archway, trying to prevent the mob from entering the Capitol.

The attempted insurrection, and President Trump's role in provoking it, was widely condemned by officials, including Republican senators Lisa Murkowski (Alaska) and Patrick J Toomey (Pennsylvania), who on the weekend called for Trump to resign. House Democrats readied to impeach Trump this week, unless Vice-President Pence and the cabinet invoke the 25th Amendment to remove him first.

After most members of the mob left the Capitol for hotel rooms and flights back to their home states, the damage caused by the pro-Trump mob has been revealed through photographs, videos and firsthand accounts.

Democrat Jason Crow released a statement on Sunday summarising a conversation he had with Army Secretary Ryan McCarthy. Crow said that he raised concerns about reports of active duty military personnel participating in the violence last week, and noted that the rioters had brought weapons and bombs to the Capitol.

US power and politics

Understand the election result and its aftermath with expert analysis from US correspondent Matthew Knott. Sign up here.