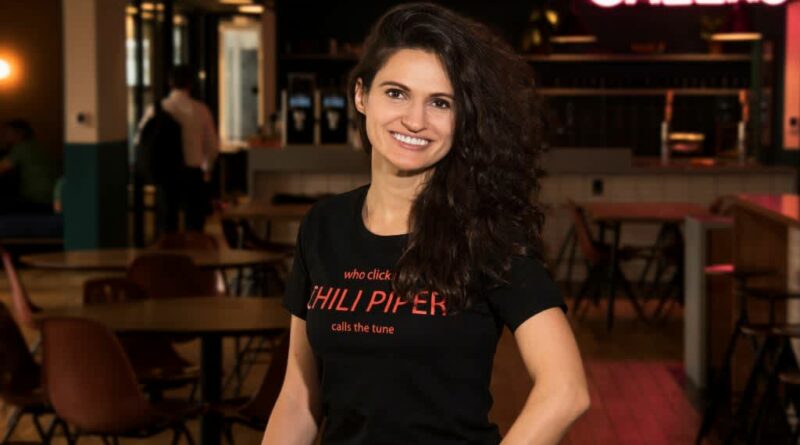 When opportunity came knocking in 2009, and it was Steve Jobs at the door, Alina Vandenberghe's career took off.

At the time, Vandenberghe was a 25-year-old software developer, working as an intern on the mobile product team at global news agency Thomson Reuters. Today, the native of Bucharest, Romania, is the co-founder and chief experience officer of Brooklyn, N.Y.-based Chili Piper, a meeting scheduler for corporate clients and their sales teams. Founded in 2016, Chili Piper brings in roughly $10 million in annual recurring revenue from 30,000 different clients, including names like Spotify, Airbnb and Shopify.

The 143-employee start-up has pulled in $54 million in funding to date, from investors like Flashpoint Venture Capital and Gradient Ventures, Google's AI investment arm. Vandenberghe says Chili Piper is on track to hit $20 million in annual revenue by the end of 2021.

Plenty of start-up founders credit Jobs with inspiring them to take the entrepreneurial leap. Vandenberghe is one of the precious few who can directly attribute her company's ethos to a personal interaction with the late Apple co-founder: All those years ago, Jobs selected a Thomson Reuters app she helped build for the launch of Apple's first iPad.

Any young software developer would have taken that vote of confidence and run with it. But for Vandenberghe, a young woman in tech who grew up under a Communist regime, working with Jobs meant something particularly special. It was the exact type of mentorship she needed to find her competitive edge.

A lesson from Steve Jobs: Always keep it simple

Take the complex, and make it simple. That was the feedback Jobs repeatedly gave Vandenberghe and her team over email and conference calls as they worked on developing the Thomson Reuters app. The message was decidedly on-brand for the Apple co-founder, whose successful designs often relied on prioritizing ease of user experience.

"Simple can be harder than complex," Jobs told Business Week back in 1998. "You have to work hard to get your thinking clean to make it simple. But it's worth it in the end because once you get there, you can move mountains."

The advice stuck with Vandenberghe, who struggled to convey complex concepts for years after arriving in New York City in 2007. Entrepreneurship wasn't new to her: In Bucharest, at the end of the communist party's reign in Romania, Vandenberghe's early-age side hustles ranged from tutoring and selling lipstick to managing her neighbor's water and electricity invoices.

But in the United States, her broken English and heavy accent made it difficult for her to effectively communicate. "When I arrived, I felt like everyone's English was 100 times superior to mine," Vandenberghe says. "It got better, but at the beginning I was struggling a lot with others and sometimes I would barely talk."

After two years of working as an independent consultant for mobile software projects — and sending out "millions of job applications" — she finally landed the Thomson Reuters internship. A few months in, her manager approached her and a colleague with a special assignment: Build an app for a small rectangular tablet encased in a metal frame and chained to the desk in a windowless basement room below Times Square in New York City.

The task required signing a non-disclosure agreement, which expired once the iPad was publicly announced. "[I] didn't say anything to anyone, including my own manager," says Vandenberghe. The feedback from Jobs to keep simplifying the user experience was constant. "Create something that will 'wow' them," she recalls Jobs saying.

After Vandenberghe and her partner finished the app, she was promoted from intern to mobile product manager. After Jobs' livestream keynote address announcing the tablet in January 2010, Vandenberghe was promoted again to director of mobile. A few days after the announcement, she left her Times Square office and looked up to see a giant ad for the app on a billboard.

"I was completely struck by it," she says. "[I] couldn't even imagine it was possible."

Competing with tech giants — including a familiar name

A decade later, when Vandenberghe finally decided to launch her own company, she remembered Jobs' advice.

Chili Piper's platform was designed to be simple — one-click, intuitive and visually appealing. The company's mission is also based on the concept of simplicity, Vandenberghe says: helping sales teams by easing the complicated back-and-forth of scheduling meetings. "The reason we are successful is because we decided to take the simple consumer experience and apply it to enterprise," she says. "Enterprise software tends to be clunkier and difficult to use."

The concept might seem silly — or, perhaps, overly simplistic — but investors point to the start-up's revenue figures as proof that Vandenberghe and her co-founder, her husband Nicolas, were onto something from the beginning.

"When we invested [in 2019], they already had north of $1 million of revenue," says Flashpoint founder and general partner Michael Szalontay. "And you know, basically no one in the U.S. was interested in giving them money."

Today, marketing tech attracts much more attention, especially in the remote-work era of virtual meetings and deals. Market research firm Gartner estimates the software side of the industry to be worth roughly $17.9 billion, while Chili Piper's internal research pegs the broader marketing tech industry at $56.5 billion.

One competitor, Atlanta-based start-up Calendly, reached a $3 billion valuation in January following a $350 million fundraise. Tech giants like Google and Apple have also entered the arena during the Covid-19 pandemic by building meeting scheduling services into Google Workspace and iWork, respectively.

"I'm sure [Google and Apple] will be able to build a great product," says Szalontay. "But hopefully, we can use our first-mover advantage and get far enough that we continue to bring instant value."

Vandenberghe downplays the competition from Google, a Chili Piper investor, saying their respective products are built to serve different needs. But the pressure of competing with Apple is real, especially since she credits Chili Piper's success to her time spent working with Jobs and the iPad team. As a first-generation immigrant and female engineer, she says, self-doubt constantly creeps in — especially when she thinks about the legacies of her new competitors.

Whenever that happens, she recalls those early days with Jobs. "I am always reminding myself to have courage," she says. "And to continue down the crazy path I'm on."

Last chance for thousands of couples to apply for £7,000 Pension Credits